Are Returnships a proven approach to source experienced talent?

Clients are increasingly looking at smarter ways to mobilise change / transformation teams.  So it was with great pleasure that I bumped into an old consulting colleague who had returned to the workplace after a career break.

“Returnships” (a term trademarked in 2008 by Goldman Sachs) help create what Hewlett calls “on-ramps” for people seeking to return to work. These short-term, nonbinding arrangements can be a valuable way to reduce the risks (real or perceived) of hiring people who’ve chosen to take an extended break. 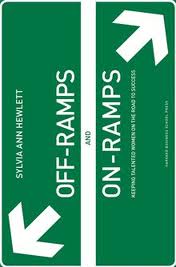 Keeping Talented Women on the Road to Success

Living Through a Career Off Ramp

Why Women Still Can’t Have it All

Princeton professor and former State Department policy planning director Anne-Marie Slaughter describes how her appearance at the Carnegie Council in February 2012 shaped her widely-praised “Atlantic” July/August 20102 article “Why Women Still Can’t Have it All.”

Ultimately Women Will Have it All

“Returnships” let companies audition professionals who are resuming their careers.

by Carol Fishman Cohen for the Harvard Business Review

Returnships are a valuable new tool, but it’s important to recognize that there have always been successful professionals who stepped out of the workforce and returned with aplomb.

Relaunchers – Back on the Career Track

It is important that companies sponsor initiatives to “reattach” with mid-level career professionals interested in re-entering the workforce after a career break.

Returnships allow people to re-engage with the world of work through flexible, meaningful work while simultaneously “testing the waters” for both the employee and the company.

At a time when companies are hiring increasing numbers of contractors than they are permanent staff it would appear that Returnships provide an opportunity for both parties to try before you buy.

Tagged as Anne-Marie Slaughter, Anne-Marie SlaughterWhy Women Still Can't Have it All, Are Returnships a proven approach to source experienced talent?, “Returnships” let companies audition professionals who are resuming their careers., Carol Fishman Cohen, Keeping Talented Women on the Road to Success, Living Through a Career Off Ramp, Off-Ramps and On-Ramps: Sylvia Ann Hewlett, Relaunchers - Back on the Career Track, Returnships” (a term trademarked in 2008 by Goldman Sachs), Sylvia Ann Hewlett